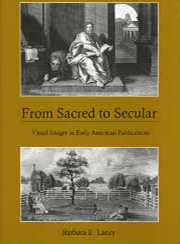 This examination of illustrations in early American books, pamphlets, magazines, almanacs, and broadsides provides a new perspective on the social, cultural, and political environment of the late colonial period and the early republic. American printers and engravers drew upon a rich tradition of Christian visual imagery. Used first to inculcate Protestant doctrines, regional symbolism later served to promote reverence for the new republic. Chapters are devoted to momento mori imagery, children’s readers, visionary literature, and illustrated Bibles. One chapter shows the demonization of the Indians even as the Indian was being adopted as a symbol of America. Other chapters deal with propaganda for the American Revolution, canonization of leaders, secularized roles for women, and socialization of sites in the new nation. Throughout, analysis of image and text shows how the religious and the secular contrasted, coexisted, and intermingled in eighteenth-century American illustrated imprints.

About the Author
Barbara E. Lacey is a Professor of History at St. Joseph College. The book includes more than 110 illustrations.