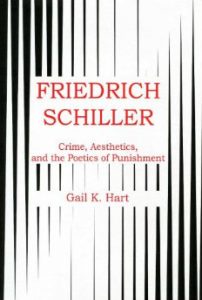 Schiller’s fascination with crime and criminals is well-documented, but little work has been done on his engagement with punishment as retributive or restorative gesture. This study examines the affinity between the pursuit of symmetry in social penal discourse and the symmetry that pleases the aesthetic spectator in Schiller’s drama, fiction, and theoretical essays. Beginning with a reassessment of the pivotal essay Die Schaubuehne als eine moralische Anstalt betrachtet, in which Schiller advances the stage as a viable counter to the absolutist state, Hart reads Maria Stuart, Dei Raeube, Fiesko, Verbrecher aus verlorener Ehre, Spiel des Schicksals, Wilhelm Tell, and Die Jungfrau von Orleans, as well as the essays and poetry in light of Schiller’s remarkably consistent abhorrence of punishment. A final chapter addresses Schillerian intertextuality in the twentieth century with a focus on Burgess and Kubrick’s A Clockwork Orange.

About the Author
Gail K. Hart is Professor of German at the University of California, Irvine.