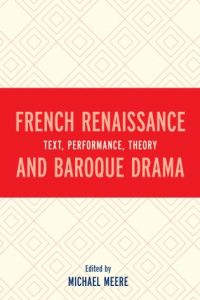 The fifteen articles in this volume highlight the richness, diversity, and experimental nature of French and Francophone drama before the advent of what would become known as neoclassical French theater of the seventeenth century. In essays ranging from conventional stage plays (tragedies, comedies, pastoral, and mystery plays) to court ballets, royal entrances, and meta- and para-theatrical writings of the period from 1485 to 1640, French Renaissance and Baroque Drama: Text, Performance, Theory seeks to deepen and problematize our knowledge of texts, co-texts, and performances of drama from literary-historical, artistic, political, social, and religious perspectives. Moreover, many of the articles engage with contemporary theory and other disciplines to study this drama, including but not limited to psychoanalysis, gender studies, anthropology, and performance theory. The diversity of the essays in their methodologies and objects of study, none of which is privileged over any other, bespeaks the various types of drama and the numerous ways we can study them.

About the Editor
Michael Meere is visiting assistant professor of French at Wesleyan University.