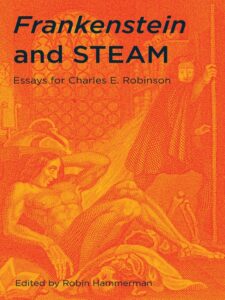 Charles E. Robinson, Professor Emeritus of English at The University of Delaware, definitively transformed study of the novel Frankenstein with his foundational volume The Frankenstein Notebooks and, in nineteenth century studies more broadly, brought heightened attention to the nuances of writing and editing. Frankenstein and STEAM consolidates the generative legacy of his later work on the novel’s broad relation to topics in science, technology, engineering, arts, and mathematics (STEAM). Seven chapters written by leading and emerging scholars pay homage to Robinson’s later perspectives of the novel and a concluding postscript contains remembrances by his colleagues and students. This volume not only makes explicit the question of what it means to be human, a question Robinson invited students and colleagues to examine throughout his career, but it also illustrates the depth of the field and diversity of those who have been inspired by Robinson’s work. Frankenstein and STEAM offers direction for continuing scholarship on the intersections of literature, science, and technology.

Robin Hammerman is a Teaching Associate Professor of Literature and Communications at Stevens Institute of Technology in Hoboken, New Jersey. Along with Andrew Russell, she is co-editor of Ada’s Legacy: Cultures of Computing from the Victorian to the Digital Age.