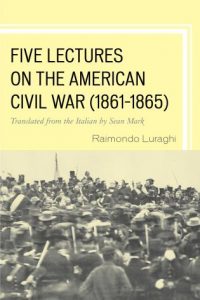 The product of over thirty years of research on the American Civil War by Italy’s most renowned authority on the subject, this study synthetically analyzes the great drama that from 1861 to 1865 that devastated the United States and gave life to the modern American nation. The book also highlights how the Civil War was the first conflict of the industrial age and an often neglected premonition of the two great wars that shook the world in the past century. The short essays presented here are the texts of five lectures delivered several years ago at the Istituto Italiano di Studi filosofici in Naples and published in Italy in 1997.

About the Author
Raimondo Luraghi is Professor Emeritus of American History at the University of Genoa.