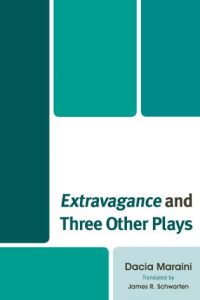 The collection includes four theatrical works of acclaimed Italian author, Dacia Maraini, in a dual-language format (Italian/English). The works have been chosen around the themes of distress, exclusion, and various manifestations of tragedy with particular reference to women. The works were chosen within a modern and a historical reference in order to give breadth to the main themes. The individual works include: (a) Stravaganza/Extravagance. The unfolding drama alludes to the Legge Basaglia (the so-called Basaglia Law, 180/1978), whose prescriptions included the closure of insane asylums throughout Italy; (b) Camille. In this piece, Maraini offers a reinterpretation of the storied and controversial relationship between the sculptor, Auguste Rodin, and his young apprentice/assistant, Camille Claudel; (c) Storia di Isabella di Morra raccontata da Benedetto Croce/The Story of Isabella di Morra as Told by Benedetto Croce. In this play, the power of literature and the written word (the implicit, culpable “character” in this play) culminates in atrocious homicide; (d) I digiuni di Catarina da Siena/The Fasting of Catherine of Siena. Powerful relationships dominate this account of Saint Catherine’s profound religiosity.

About the Author
Dacia Maraini is an Italian writer, who has published several short stories, novels, and poetry. She helped found the Teatro del Porcospino and the Teatro della Maddalena, and has received numerous literary prizes spanning five decades.

About the Translator
James R. Schwarten is lecturer in Italian and Italian studies at John Cabot University.