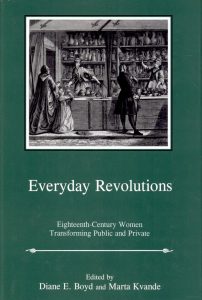 Women’s everyday choices can engender revolutionary acts. The essays collected here embrace this premise and go beyond the Habermasian public/private paradigm to look at the ways in which eighteenth-century women defied the restrictions their culture sought to enforce. But while recent studies have linked women to public activity by analyzing revolutionary moments, such work often implies that those moments were isolated within a framework of containment. These essays demonstrate how women of the period were not circumscribed to precious revolutionary moments but instead participated in a web of acts, ranging in scale from work, to politics, to art. Furthermore, our recognition of women’s everyday revolutionary behavior revises the way we understand the history of the public sphere; the public/private paradigm did not operate monolithically but could be recast to allow for and empower many kinds of action and agency. Diane E. Boyd teaches English at Furman University. Marta Kvande is an assistant professor of English at Voldosta State University.