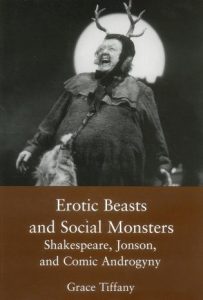 The voluminous contemporary critical work on English Renaissance androgyny/ transvestism has not fully uncovered the ancient Greek and Roman roots of the gender controversy. This work argues that the variant Renaissance views on the androgyne’s symbolism are, in fact, best understood with reference to classical representations of the double-sexed or gender-baffled figures, and with the classical merging of the figure with images of beasts and monsters.