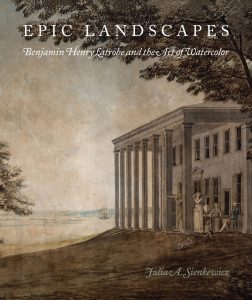 Epic Landscapes is the first study devoted to architect Benjamin Henry Latrobe’s substantial artistic oeuvre from 1795, when he set sail from Britain to Virginia, to late 1798, when he relocated to Pennsylvania. Thus, this book offers the only extended consideration of Latrobe’s Virginian watercolors, including a series of complex trompe l’oeil studies and three significant illustrated manuscripts. Though Latrobe’s architecture is well known, his watercolors have received little critical attention. Epic Landscapes rediscovers Latrobe’s watercolors as an ambitious body of work and reconsiders the close relationship between the visual and spatial sensibility of these images and his architectural designs. It also offers a fresh analysis of Latrobe within the context of creative practice in the Atlantic world at the end of the eighteenth century as he explored contemporary ideas concerning the form of art for Republican society and the social impacts of revolution.