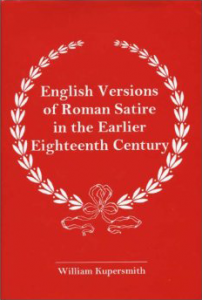 The Imitation was a popular verse form in the first half of the eighteenth century. A work of classical poetry would be adapted to contemporary circumstances, so that a satirist such as Alexander Pope would satirize contemporary England as if he were Horace writing of ancient Rome. This book discusses not only well-known examples such as Pope’s Imitations of Horace and Samuel Johnson’s The Vanity of Human Wishes, but puts them into context by considering lesser known examples of the genre, by canonical authors such as Jonathan Swift, Henry Fielding, and Christopher Smart, and an array of lesser poets. It will appeal not only to scholars interested in eighteenth-century English poetry, but to students of classical influences on English literature, of satire, and of theory and practice of translation. William Kupersmith is Professor of English at the University of Iowa.