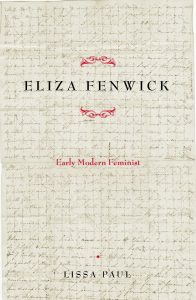 Eliza Fenwick is the previously untold story of the life of an extraordinary woman who paved her own unique path throughout the late eighteenth and nineteenth centuries as she made her way from country to country, from working as a writer to becoming a teacher and school owner. Author Lissa Paul brings to light Fenwick’s letters for the first time to show the relationships she developed with many key figures of her time, and to tell Fenwick’s story as depicted by the woman herself. She began as a writer in the radical London of the 1790s, in Mary Wollstonecraft’s circle, and when her marriage crumbled, she became a prolific author of children’s literature to support her family. Fenwick eventually moved to Barbados, becoming the owner of a school, while confronting the reality of slavery in the British Colonies. She would go on to establish schools in numerous cities in the U.S. and Canada, all the while taking care of her daughter and grandchildren. Despite enduring financial hardship, a broken marriage, and the deaths of her son, her daughter, and her two eldest grandsons, Eliza’s riveting letters attest to her intelligence, grace, and persistence as she moved across the world in search of self-sufficiency.

“
Fenwick’s life was an odyssey—and Paul makes it a powerful story. The sheer wealth and richness of her research…are stunning. This is not just a book to consult. It is a book to read.
”
- William McCarthy, Iowa State University
“
The scholarship is meticulous, exhaustive and wide-ranging, and the author shows intimate and in-depth familiarity with the material.
”
- Louise Joy, University of Cambridge
Library, Museums and Press
181 South College Avenue, Newark, DE 19717-5267