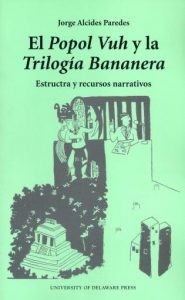 This book offers an in-depth study of the internal structures of Popol Vuh, the Sacred Book of the Maya-Quiché people of Guatemala, and of the ways in which in the main characters of this text are configured. This is accompanied by a similar, comparative analysis of the three novels widely known in the Hispanic world as the Banana Trilogy, written between 1950 and 1960 by the winner of the 1967 Nobel Prize for Literature, Miguel Angel Asturias. By showing a direct relationship between the macrostructure of Popol Vuh and its literary devices (including character configuration) and those of the Banana Trilogy, this book shows that Asturias relied heavily on Popol Vuh as a literary model when writing his three anti-imperialist novels. This study, which is entirely in Spanish, provides new perspectives for an understanding of Asturia’s narrative, showing for the first time that Asturia’s conscious use of Mayan culture and artistic devices was not limited to the writing of his canonized Neo-Indigenist novels.