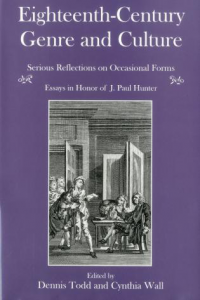 This collection of essays, including contributions by Paula Backscheider, Martin C. Battestin, and Patricia Meyer Spacks—examines the relationships between history, literary forms, and the cultural contexts of British literature from the late seventeenth to the late eighteenth century. Topics include print culture and the works of Mary, Lady Chudleigh; the politics of early amatory fiction; Susanna Centlivre’s use of plot; novels by women between 1760 and 1788; and the connection between gender and narrative form in the criminal biographies of the 1770s.