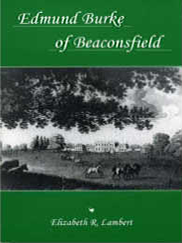 This study details the domestic life and private friendships of Edmund Burke from 1750, when he left Dublin to study law at Middle Temple, London, until his wife Jane’s death in 1812, fifteen years after Burke’s. While the events of Burke’s public life and his political theories are familiar to many, the private and domestic Burke is not. At the height of his career he identified himself to a passing stranger as “Burke of Beaconsfield,” and at the end of his life, he chose to be buried in the small church of St. Mary’s All Saints Beaconsfield rather than in Westminster Abbey. In many and complex ways Beaconsfield is an essential key to the Edmund Burke who defined himself as the embodiment of Cicero’s “new man” and whose marital relationship with Jane Nugent Burke sustained, nurtured, and drove him throughout his political career.

About the Author
Elizabeth R. Lambert is a Professor of English at Gettysburg College.