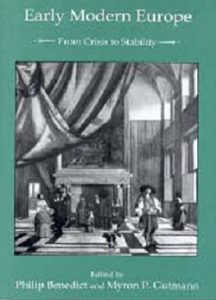 Fifty years after the beginning of the debate about the “general crisis of the seventeenth century,” and thirty years after Theodore K. Rabb’s reformulation of it as the “European struggle for stability,” this volume returns to the fundamental questions raised by the long-running discussion: What continent-wide patterns of change can be discerned in European history across the centuries from the Renaissance to the French Revolution? What were the causes of the revolts that rocked so many countries between 1640 and 1660? Did fundamental changes occur in the relationship between politics and religion? Politics and military technology? Politics and the structures of intellectual authority? A central figure in the general crisis debate, J. H. Elliott, opens the volume with a remarkable retrospective assessment of it. Nine essays by prominent historians then explore important facets of these questions, some on a broad continent-wide canvas, others through studies of individual countries from Spain to Scandinavia.

About the Editors
Philip Benedict is professor ordinaire at the University of Geneva’s Institut d’Histoire de la Réformation.
Myron P. Gutmann directs the Inter-University Consortium for Political and Social Research at Ann Arbor.