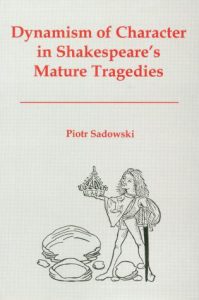 Dynamism of Character in Shakespeare’s Mature Tragedies applies the systems theory of character to the analysis of the psychological and dramatic consistency of the main characters from Hamlet, Othello, King Lear, and Macbeth. The theory considers human behavior in terms of functional equilibrium between the stable properties of the mind, independent of the pressures of the sociocultural environment and the immediate situational context. What we call “character” thus denotes an autonomous configuration of psychological elements, which ensure the consistency and continuity of individual identity, despite the influence of the changing external circumstances. Systems theory of character thus offers an interesting alternative both to the traditional, intuitive, and impressionistic approaches to character criticism, to the New Critical aesthetic readings of Shakespeare’s plays that often ignore psychology as a valid interpretive perspective, and to the more recent cultural materialist readings that consider dramatic characters solely as functions of external, sociocultural forces.