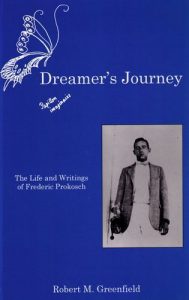 Dreamer’s Journey: The Life and Writings of Frederic Prokosch is the first comprehensive study of the enigmatic, erratically brilliant novelist and poet. It explores his published and unpublished writings, his troubled personal life, the conflicts arising from his homosexuality, his wanderings as a kind of permanent expatriate, and his preoccupation with reinventing his persona and creating an imaginary and highly dramatic past for himself. An expert dissembler, much in Prokosch’s life was false and theatrical. His activities as a forger interweave with a long history of lies and deceptions. Most of Voices: A Memoir, his last published work, is pure fantasy and part of an elaborate hoax. Self-deluding, he succumbed at times to the persuasiveness of his own fictions. Dreamer’s Journey presents the story of an immensely gifted writer, “a sort of Berlioz in prose,” who found himself unable to live at the level of his dreams.

About the Author
Robert M. Greenfield is Professor Emeritus at Lake Forest College.