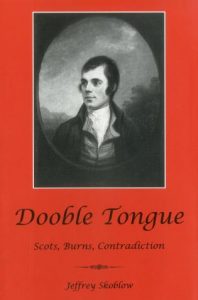 Dooble Tongue is an imaginative meditation on Robert Burns and Scottish poetry, as well as a book that engages and contests the customary assumptions and practices of literary criticism. Beginning with an examination of two contemporary Scottish poets, W. N. Herbert and Robert Crawford, and moving back in time to the Scottish Modernist master Hugh MacDiarmid, then further back to Burns himself, the study of the Scottish tradition is situated in a broad historical context. The focus throughout is on language(particularly Scots), more broadly vernacular literature in relation to culturally elite literary and critical modes as well as on questions of literary nationalism and the cultural politics of poetic discourse.