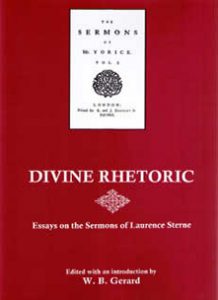 Laurence Sterne, the author of the innovative fictions The Life and Opinions of Tristram Shandy, Gentleman and A Sentimental Journey, served most of his life as a rural Anglican clergyman in Yorkshire, England; for twenty years his sermons were his primary written labors. Sterne published the first two volumes of sermons as the Sermons of Mr. Yorick in 1760 after the initial, widely celebrated volumes of Tristram Shandy and the ensuing controversy revealed their complex paradoxes: they are both sacred and earthy, entertaining and instructional, products of art, duty, and the desire for profit and fame. The dozen essays in Divine Rhetoric, including an extensive critical history, examine the rhetorical and theological contexts of the sermons as well as their possible influences, discerning their intrinsic value to scholars of the fiction of Laurence Sterne and eighteenth-century Anglicanism. The book is accompanied by an audio CD of one of Sterne’s sermons.

About the Editor
W. G. Gerard is Associate Professor of English at Auburn University.