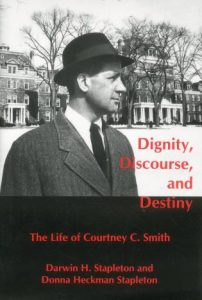 Courtney C. Smith was educated at Harvard in the 1930s, took a Rhodes Scholarship, taught English literature at Princeton, and was the first national director of the Woodrow Wilson Fellowship Program before becoming president of Swarthmore College in 1953 at the age of thirty-six. Simultaneously he became the American Secretary of the Rhodes Scholarship Trust. His engagement with education, philanthropy, and government over the next sixteen years resonated with such major issues of the times as McCarthyism, the future of the liberal arts, and race relations. His skill at fundraising provided Swarthmore with new science, library, and other buildings, but he focused even more on attracting first-rate faculty and undergraduates. While he was generally successful in negotiating the shoals of faculty discontent and student unrest in the late 1960s, Smith’s death in office during a sit-in in January 1969 made him a visible casualty of the era. Illustrated.

About the Authors
Darwin H. Stapleton is executive director of the Rockefeller Archive Center.
Donna Heckman Stapleton is a social worker for the City Schools of New Rochelle, New York.