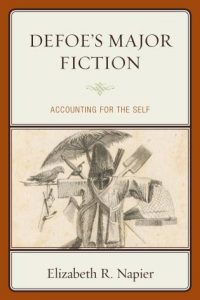 This book focuses on the pervasive concern with narrativity and self-construction that marks Defoe’s first-person fictional narratives. Defoe’s fictions focus obsessively and elaborately on the act of storytelling—not only in his creation of idiosyncratic voices preoccupied with the telling (and often the concealing) of their own life stories but also in his narrators’ repeated adversion to other, untold stories that compete for attention with their own.

Defoe’s narratives raise profound questions about selfhood and agency (as well as demonstrate competing attitudes about narration) in his fictive worlds. His canon exhibits a broad range of first-person fictional accounts, from pseudo-memoir (A Journal of the Plague Year, Memoirs of a Cavalier) to criminal autobiography (Moll Flanders) to confession (Roxana), and the narrators of these accounts (secretive, compulsive, fractive) exhibit an array of resistances to the telling of their life stories. Such experiments with narration evince Defoe’s deep involvement in projects of self-description and -delineation, as he interrogates the boundaries of the self and dramatizes the arduousness of self-accounting. Defoe’s fictions are emphatically consciousness-centered and the significance of such a focus to the development of the novel is patently as great as is his “realistic” style. Defoe’s narrative project, in fact, challenges current views on the moment at which inwardness and interiority begin, as Lukács argued, to comprise the subject matter of the novel, implicitly attributing to identity and consciousness a place of signal and complex importance in the new genre.

About the Author
Elizabeth R. Napier is professor of English and American literatures at Middlebury College.