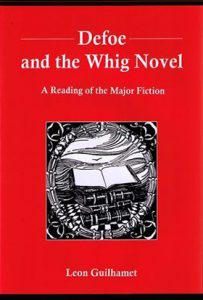 This study places Defoe’s major fiction squarely in the emerging Whig culture of the early eighteenth century. It offers an alternative to the view that Defoe is essentially a writer of criminal or adventure fiction and to the Marxist judgment that he extols individualism or derives his greatest inspiration from popular print culture. This study reads the novels as reflections of mainstream Whig social and political concerns, the same concerns Defoe revealed in his verse and expository writings before and after his major period of fiction writing, 1719-24.

About the Author
Leon Guilhamet is professor of English at the City College of New York.