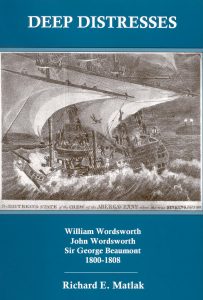 Deep Distresses is a study of the intersecting family and professional vicissitudes that afflicted Wordsworth during the period of his greatest poetic productivity. The negative national publicity over his mariner brother’s death at sea is the focus of the family tragedy; hostile reception to Poems in Two Volumes (1807) is the focus of professional duress. Both topics become related through the intercession of the poet’s patron, Sir George Beaumont, who attempts to ameliorate the family tragedy with money and his painting of Peel Castle in a Storm, while hoping to groom Wordsworth for a place among the cultural elite of London. In its attention to nineteenth-century culture and business, this study offers an entirely new context for reading and re-interpreting many of Wordsworth’s major works from “Michael” through the major lyrics of Poems in Two Volumes and the latter books of the The Prelude.

About the Author
Richard Matlak is a Professor of English and Director of the Center for Interdisciplinary and Special Studies at the College of the Holy Cross.