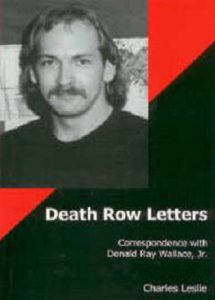 In the year 2000 the author, a professor of anthropology, struck up an acquaintance with a prisoner on death row in Indiana. The inmate, Donald Ray Wallace, Jr., bears a vital resemblance to Dostoyevsky’s fictional protagonist in Crime and Punishment. Like Rashkolnikov, Wallace undergoes a spiritual journey from crime to redemption. But Wallace, unlike Rashkolnikov, is slated for death. Whether Wallace had an unidentified accomplice in the murders that condemned him remains an unsolved question. In any case, four people died as the result of the robbery Wallace was attempting to commit. These letters provide access to the reflections of a brilliant mind grappling with existence on death row, dramatizing the spiritual and social void created in our prisons. They demonstrate the way that our justice system may incarcerate a confused twenty-year old and, some twenty years later, execute a very different man.