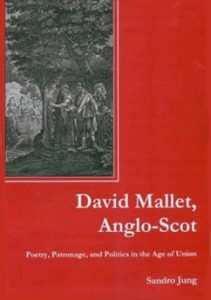 This study of the life and works of David Mallet (?1705-65) is the first study of Mallet for the past one hundred and fifty years and assesses the poet’s significance within his own period, arguing that modern scholarship has unduly neglected this complex personality who represented changing notions in taste and aesthetics, the intersection between literature and politics, and fashioned professional personae for himself as controversial patriot-poet, party writer, historian, editor, dramatist, and spy. An Anglo-Scot, he negotiated national prejudices, Jacobite leanings, and—when he moved to London in the 1750s—adopted the cultural patriotism of the Hanoverians. The post-Union climate enabled him to make influential friends, such as Pope, Lyttleton, Bolingbroke, and Chesterfield, who promoted his works and on whose behalf he wrote (mostly for pay), until his death. The book offers a comprehensive reconsideration of hitherto unknown manuscript material and contributes to dismantling Johnson’s prejudiced view of Mallet, which to this day has tainted Mallet’s critical reputation.

About the Author
Sandro Jung is Research Fellow in English at the University of Salford.