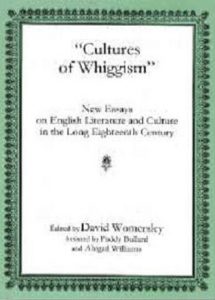 The essays collected in this volume explore the Whiggish literary culture that arose in England in the late seventeenth century and continued throughout the following century. From the pre-history of Whiggism in the court of Charles II to the fractures opened up within it by the pressures created by the French Revolution in the 1790s, the interactions between Whiggish politics and literature are sampled and described. As both how literature was made expressive of Whiggish attitudes, and how Whiggism itself proved a spur to literary innovation, become steadily more clear, so the outlines of nothing less than a new literary history of the eighteenth century comes into view.

About the Editor
David Womersley is the Thomas Warton Professor of English Literature at the University of Oxford.