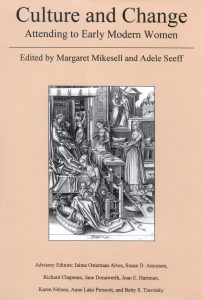 This is the fourth in the series of proceedings of the interdisciplinary conference sponsored by the Center for Renaissance & Baroque Studies at the University of Maryland. This volume reflects the commitment of scholars to the exploration of early modern women’s culture as recovered through images, literature, music, and archives of the period. In essays on “Stories,” “Goods,” “Faiths,” and “Pedagogues,” scholars from a wide variety of fields discuss the contributions that reveal early modern women’s influence on the societal and cultural transformations in which they participated. Nearly thirty workshops from the conference are summarized, and these offer a detailed overview of current research in early modern women’s studies. An introduction by Margaret Mikesell traces the development of the Attending to Early Modern Women symposia (1990-2000). A keynote address by Diane Purkiss on stories of maternal grief located in Scottish witch-trial confessions is also included.

About the Editors
Margaret Mikesell is Associate Professor of English at John Jay College, The City University of New York.
Adele Seeff is the director of the Center for Renaissance & Baroque Studies at the University of Maryland.