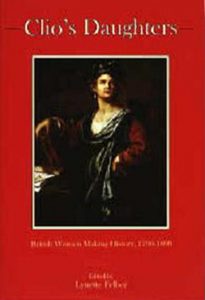 Clio’s Daughters exposes the reality behind the notion that nineteenth-century history was an exclusively male preserve. A fortuitous convergence of factors—including the popularization of history and the success of “lady novelists” in the literary marketplace—contributed to women’s emergence as writers of history. The essays in this collection demonstrate that women were neither mere muses or passive consumers of history and histories. These underground historians may have been denied recognition as professional historians, but they appropriated historical subjects for fiction or disguised history in seemingly nonfictional genres. A major contribution to the study of British historical cultures, Clio’s Daughters reveals the wealth of women’s historical writings, demonstrating that Victorian domestic ideology did not prevent women from making history, featuring both as historical subjects and writers of history. The contributors discover new texts and methodologies, exploring nineteenth-century British women’s historiography, their writing of history, often through unexpected venues not previously regarded as sources of historical representation.

About the Editor
Lynette Felber is Professor of English at Indiana University-Purdue University in Fort Wayne.