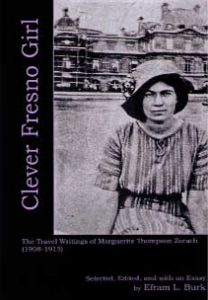 This volume features thirty art-related travel articles by the American modern artist, Marguerite Thompson Zorach (1887-1968), reprinted for the first time since they appeared in her hometown newspaper, the Fresno Morning Republican, from 1908-15, the period that corresponds to that when she was studying art in Paris at La Palette and traveling throughout Europe, the Middle East, and Asia. Her writings relate to the cities, museums, and cultures in her whirlwind Grand Tour to which she brought incisive and critical commentary. The accompanying essay examines her life in Paris, the people she met, and the art she was exposed to, and how all of this helped shape her own work and identity as a woman artist, a world traveler, and an American. In her travels and activities as an artist, Thompson pushed the perceived boundaries of gender conventions and stereotypes during the first decades of the twentieth century.

About the Editor
Efram L. Burk has curated nearly a dozen exhibitions and published articles related to American and European prints and drawings from the late nineteenth and early twentieth centuries.