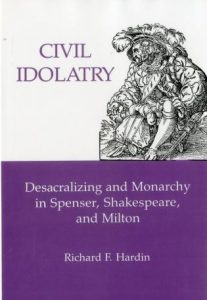 This work discusses important texts that scrutinize the cult of monarchy in light of the injunction against idolatry. When Milton deplored the “civil kind of idolatry,” he echoed a significant theme in earlier texts—Erasmus’s political writings, Spenser, and Shakespeare’s political plays. Milton redefines conquest and fatherhood in response to contemporary monarchists’ patriarchalism and conquest-theory.