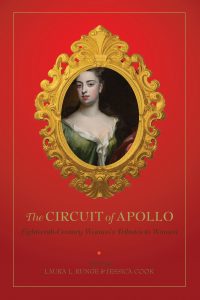 The Circuit of Apollo is a book about early modern women’s networks traced through affirmations of respect, admiration, love, and sometimes competition. It emerges out of the desire to highlight what relationships among women in the long eighteenth century tell us about the emotional lives and the creative work of women. The essays collected here attest to the vital practice of commemorating women’s artistic and personal relationships and in doing so illuminate the complexity of female friendships and honor as well as the robust creativity and intellectual work contributed by women to early modern culture. The subjects of these essays cover nearly two hundred years of women’s lives from the late seventeenth to the mid-nineteenth centuries. The geographical diversity of people represented and the span of time covered underscores the consistency of the practice of women’s tributes to other women, even when it took the form of critical engagement. Essays trace the relationships between and among women such as Anne Finch, Mary, Lady Chudleigh, Jane Barker, Mary Barber, Eliza Haywood, Anna Barbauld, Anna Seward, Helen Maria Williams, and Ameila Opie, and closes with Betty Schellenberg’s thoughtful afterword on women in the archive and the continued relevance of our work.

Laura L. Runge is Professor of English at the University of South Florida and the author of Teaching with the Norton Anthology of Literature by Women.

Jessica Cook teaches in the English department of the University of South Florida.

Reviews of 'The Circuit of Apollo: Eighteenth-Century Women’s Tributes to Women'

“
The most significant contribution of this collection…is not repeating examples of supportive women writers’ friendships but that these essays further develop the complexities, nuances, and tensions in female writers’ relationships.
”
- Susan Staves, Brandeis University
Library, Museums and Press
181 South College Avenue, Newark, DE 19717-5267