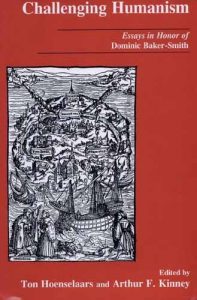 Dominic Baker-Smith has been a leading international authority on humanism for more than four decades, specializing in the works of Erasmus and Thomas More. The present collection of essays by colleagues throughout Europe, Canada, and the United States examines humanism in both its historic sixteenth-century meanings and applications and the humanist tradition in our own time, drawing on his work and that of scholars who have followed him.