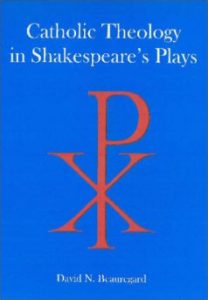 David N. Beauregard explores and reexamines Shakespeare’s theology in Catholic Theology in Shakespeare’s Plays from the standpoint of current revisionist history of the English Reformation. This new perspective is based on three developments. Currently, there is a steadily growing interest in Shakespeare’s Catholic background. Recent evidence has surfaced strongly suggesting that Shakespeare’s father and daughter were both Catholic. John Shakespeare’s “Spiritual Testament” and his presence on the recusant rolls are now accepted as indications of his Catholicism, and the listing of Susanna Shakespeare by the Stratford ecclesiastical court as among those “popishly affected” suggests a continuity of Catholicism in the Shakespeare family. Second, the revival of the theory that Shakespeare’s “lost years” were spent in the service of a Lancashire Catholic nobleman accords with these indications. Third, and most importantly, the work of Christopher Haigh, Eamon Duffy, J. J. Scarisbrick, and others has led to a revised understanding of the English Reformation, which maintains that the English Reformation was imposed from above but resisted by the general populace so that it took root very slowly. In the words of Christopher Haigh, late sixteenth-century England was a “Protestant nation, but not a nation of Protestants.” These three recent developments indicate an obvious need for a reconsideration of Shakespeare’s theology. This study examines his plays from the perspective of Catholic theology and the revisionist history of the English Reformation to provide an even view of Shakespeare’s theology. It describes the effect of Catholic theology on the plays, noting points of difference in theological doctrine, sacramental liturgy, and devotional practice.

About the Author
David N. Beauregard is adjunct professor of Church History at St. John’s School of Theology in Boston.