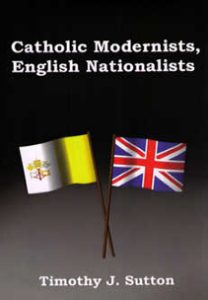 Catholic Modernists, English Nationalists examines how the Catholic conversions of Gerard Manley Hopkins, Ford Madox Ford, T. S. Eliot (an Anglo-Catholic), Evelyn Waugh, and Graham Greene influenced and were influenced by literary modernism in England. These modernist Catholic converts in England owe their conversions to a desire for a comprehensive spiritual answer to the social and psychological challenges of modernity. Because an impulse toward transcendent ideologies and a persistent nostalgia were central components of conservative strains of literary modernism in England, these converts were led toward Catholicism in part because of their practice of modernist aesthetics and its correlative ideological positions. Therefore, this book offers a nuanced trajectory of the modernist movement by suggesting that conservative strains of modernism developed directly because of the early modernists’ emphasis on reviving certain fragments of literary tradition and due to the inherent nostalgia in much of their work.

About the Author
Timothy J. Sutton teaches at the University of Miami.