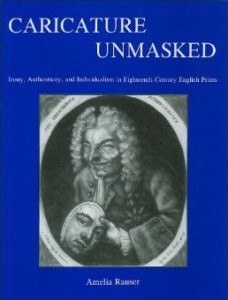 This book is the first to examine the meaning encoded in the very form of caricature, a form of popular and polemical visual art that burst suddenly on the scene in late eighteenth-century England, and to explain its rise as a consequence of the emergence of modernity, especially the modern self. Caricature and the modern self developed in tandem: as the modern notion of selfhood—with its valorization of interiority, private authenticity, and consistency across time—rather suddenly replaced older, more flexible notions of identity, so caricature developed as a technology for representing this new self, making character visible on the surface of the body, unmasking the public role and revealing the authentic private self beneath. Through the detailed analysis of specific prints and a wide-ranging compilation of historical evidence, this book constructs a rich and precise cultural history of the conceptual shift that led to the explosion of caricature in late eighteenth-century England. Complemented with seventy-eight illustrations.

About the Author
Amelia Rauser is Associate Professor of Art History at Franklin & Marshall College.