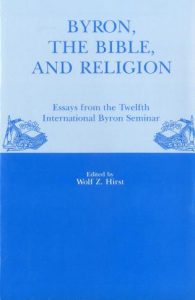 This work consists of eight essays selected from papers given at the Twelfth International Byron Symposium. Much of Byron’s poetry is examined, but the focus is on the Mysteries and Don Juan. The subjects include the Cain figure, Byron’s skepticism, his attitude toward Christianity and religion in general, and his literary use of the Bible.