University of Delaware Press
by John Beckett with Sheila Aley 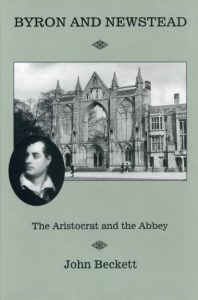 Byron and Newstead is a study of England’s greatest Romantic poet in the context of his role as an English aristocrat. The book examines the whole structure of Byron’s complex financial problems from his youth to his final days in Greece, and it shows how important it is to see these in the context of his aristocratic heritage. For the first time Byron is examined as a landed aristocrat, and his business affairs unraveled in this context.