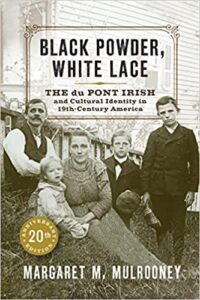 * E-Book Available
Order Online
Series
Cultural Studies of Delaware and the Eastern Shore
Twenty years ago, Margaret Mulrooney’s history of the community of Irish immigrant workers at the du Pont powder yards, Black Powder, White Lace, was published to wide acclaim. Now, as much of the materials Mulrooney used in her research are now electronically available to the public, and as debates about immigration continue to rage, a new edition of the book is being published to remind readers of the rich materials available on the du Pont workers, and of Mulrooney’s powerful conclusions about immigrant communities in America. Explosives work was dangerous, but the du Ponts provided a host of benefits to their workers. As a result, the Irish remained loyal to their employers, convinced by their everyday experiences that their interests and the du Ponts’ were one and the same. Employing a wide array of sources, Mulrooney turns away from the worksite and toward the domestic sphere, revealing that powder mill families asserted their distinctive ethno-religious heritage at the same time as they embraced what U.S. capitalism had to offer.

Margaret Mulrooney is a Professor of History at James Madison University in Harrisonburg, VA. She is the author of Deep Current: Race, Place and Memory in Wilmington, NC (2018) and the editor of Fleeing the Famine: North America and Irish Refugees, 1845-1851 (2003).
Library, Museums and Press
181 South College Avenue, Newark, DE 19717-5267