University of Delaware Press
by Lee A. Farrow 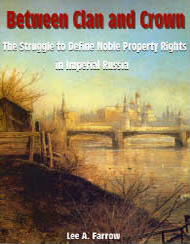 This is the first study in English to comprehensively examine property law in Imperial Russia, focusing on the struggle to define the scope of individual noble property rights and what that process reveals about the limits of noble freedom within the Russian state. The author uses property laws and right as the measuring stick for determining the degree to which nobles had political, or even traditional rights, that might have limited the power of the monarch, and argues that while the nobility may have worked side-by-side with the tsar in many areas, Russia’s land and inheritance laws suggest that it was an unequal partner at best. The book’s conclusions are based on the author’s extensive research in published and archival primary sources, including inheritance and land disputes overseen by the Imperial Russian Senate, as well as confiscation records from the Chancellery of Confiscations, and are an important contribution to the going debate about the nature of Russian aristocracy.

About the Author
Lee A. Farrow is Associate Professor of History at Auburn University Montgomery.