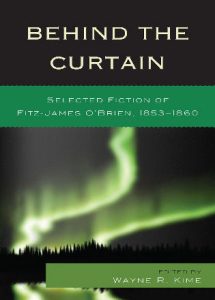 In the decade that followed his emigration to the United States in 1851, Fitz-James O’Brien (1828-1862) produced a steady stream of contributions to American newspapers and magazines. As short story writer, essayist, poet, dramatist, reporter, reviewer, drama critic, and editor he won reputation as one of the ablest young writers in New York City, displaying what one contemporary termed an “extraordinary” talent. But soon after his early death from complications of a battle wound, the sense of wonder at O’Brien’s prolific accomplishments began to dissipate. In 1881 his friend William Winter brought out The Poems and Stories of Fitz-James O’Brien, a one-volume collection that spared him the oblivion that awaits even the ablest magazine writers. That book, with reprintings derived from it, has formed almost by itself the basis for O’Brien’s lasting reputation. In the early decades of the twentieth century O’Brien continued to be admired as the most significant practitioner in the short story in the United States of the 1850s. However, since then the recognition of his achievement has focused on a few tales of the macabre and the supernatural. He is now remembered in two unrelated contexts: as a colorful member of the “Bohemian” circle that flourished in New York City in the years prior to the Civil War, and as author of such stories as “The Diamond Lens,” “The Lost Room,” and “What Was It? A Mystery.”

The present volume reintroduces the fiction of Fitz-James O’Brien to modern readers by presenting fourteen of his works, five here reprinted for the first time, that together suggest the development and range of his accomplishment as a short story writer. Additionally, editorial commentary on individual stories reveals O’Brien’s attunement to the fashions, fads, interests, and concerns that manifested themselves in his adopted city and country. Though immersed in the details of his own era, O’Brien cherished a belief that some of his writings would live beyond it. The present collection offers evidence that, not only for his vivid contemporaneity but also for his innovativeness and technical skill, the young author’s hope for lasting memory as a writer of short fiction was well founded.

The volume comprises, first, an introduction that sketches O’Brien’s literary career and traces his development as a fiction writer. The stories appear next, arranged chronologically in the order of their publication. Each is preceded by editorial commentary that affords information about its place in the author’s career and identifies events and circumstances surrounding its publication. O’Brien’s frequent references to persons, places, books, and events that may require identification are explained in the notes that follow each story. A bibliography and an index conclude the volume.