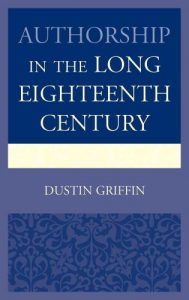 This book deals with changing conditions and conceptions of authorship in the long eighteenth century, a period often said to have witnessed the birth of the modern author. It focuses not on authorial self-presentation or self-revelation but on an author’s interactions with booksellers, collaborators, rivals, correspondents, patrons, and audiences. Challenging older accounts of the development of authorship in the period as well as newer claims about the “public sphere” and the “professional writer,” it engages with recent work on print culture and the history of the book. Methodologically eclectic, it moves from close readings to strategic contextualization. The book is organized both chronologically and topically. Early chapters deal with writers – notably Milton and Dryden – at the beginning of the long eighteenth century, and later chapters focus more on writers — among them Johnson, Gray, and Gibbon — toward its end. Looking beyond the traditional canon, it considers a number of little-known or little-studied writers, including Richard Bentley, Thomas Birch, William Oldys, James Ralph, and Thomas Ruddiman. Some of the essays are organized around a single writer, but most deal with a broad topic – literary collaboration, literary careers, the republic of letters, the alleged rise of the “professional writer,” and the rather different figure of the “author by profession.”

About the Author
Dustin Griffin is professor of English emeritus at New York University.

Reviews of 'Authorship in the Long Eighteenth Century'

“
This groundbreaking study, notable for its erudition and thorough understanding of the milieu and the times, should be required reading for all serious scholars of Restoration and 18th-century literature
”
- Choice
Library, Museums and Press
181 South College Avenue, Newark, DE 19717-5267