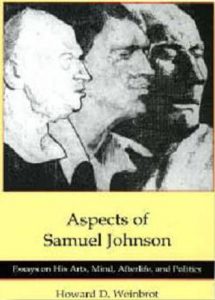 Howard D. Weinbrot’s Aspects of Samuel Johnson: Essays on His Arts, Mind, Afterlife, and Politics collects earlier and new essays on Johnson’s varied achievements in lexicography, poetry, narrative, and prose style. It considers Johnson’s uses of the general and the particular as they relate to the reader’s role in the creative process, his complex approach to the concept of literary genre, and his resolutely un-Humean view of skepticism. It examines the ways in which Johnson’s reputation as a critic and biographer was challenged and affirmed after his death, and it demonstrates that Johnson was known and admired in eighteenth-century France until Boswell’s portrait of Mr. Oddity replaced Dictionary Johnson. The book concludes with four essays concerning the vexed controversy regarding Johnson and Jacobitism and Johnson’s political affiliation in Hanoverian Britain. Aspects of Samuel Johnson consolidates old ground and breaks new ground during the 250th anniversary of the appearance of his Dictionary of the English Language.

About the Author
Howard D. Weinbrot is Ricardo Quintana Professor of English and William Freeman Vilas Research Professor in the College of Letters and Science, the University of Wisconsin, Madison.