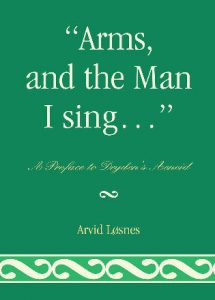 This study—referred to as a “preface”—is given this designation because its aim is not to offer an up-to-date overall assessment of Dryden’s translation of Virgil’s Aeneid, but rather to provide a valid basis for such an assessment. In this it seeks to provide a comprehensive analysis of relevant areas—i.e. the “conditions of expression”—forming the very basis of the genesis of Dryden’s translation, and thus also of a valid understanding of it (cf. R.A.Brower, Alexander Pope: The Poetry of Allusion [London, 1968], p.98).

Thus in Part One the main concern is to provide a first-hand picture of the background from which Dryden’s translation came into being: the tradition of Aeneid translation, the evolution of Dryden’s theory of translation, his use of textual sources: i.e., a systematic presentation is provided of the various conditions of expression involved as Dryden took upon himself to render Virgil’s Aeneid into English poetry.

In Part Two, “From Virgil to Dryden”, relevant aspects of Dryden’s conception of Virgil and essential features of the Virgilian epic are presented with reference to the assessments of modern classical scholars, and, indeed, Dryden’s conceptions in these matters are seen to a large extent to have their support—a feature which serves to underline the validity of his understanding of the poem he set out to translate. Here, various analogies—historical, political literary—between the respective periods in which Virgil and Dryden lived are also drawn attention to, reflecting a basic similarity in the conditions of expression under out of which Virgil’s Aeneid and Dryden’s translation came into being. Similarly, Dryden’s concern for literary expression—both that of Virgil, as well as his own in rendering the original author—and the significance devoted to this are given special attention, underscoring his lifelong relationship with Virgil’s poetry and his sensitive attitude to the poetic style of Virgil that arose from this.

Løsnes devotes special attention to Dryden’s numerous references to Longinus’s On the Sublime. An influential French translation of this work was published in 1674, and Dryden’s acquaintance with Longinus has been assumed to stem from this translation. However, the author believes Longinian influence in Dryden’s critical writings can be found as far back as the preface to Annus Mirabilis (1667). Here he comments on Aen. VI. 726-27. Clearly this would indicate that Longinus is an influence to be reckoned with in Dryden’s translation of the Aeneid.

About the Author
Arvid Løsnes is Senior Lecturer emeritus at Oslo University College of Education (Faculty of Education and International Studies).