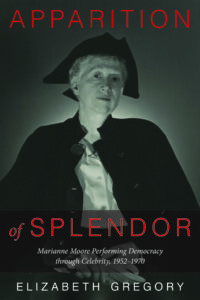 While the later work of the great Modernist poet Marianne Moore was hugely popular during her final two decades, since her death critics have condemned it as trivial. This book challenges that assessment: with fresh readings of many of the late poems and of the iconic, cross-dressing public persona Moore developed to deliver them, ‘Apparition of Splendor’demonstrates that Moore used her late-life celebrity in daring and innovative ways to activate egalitarian principles that had long animated her poetry. Dressed as George Washington in cape and tricorn and writing about accessible topics like sports, TV shows, holidays, love, activism, mortality and celebrity itself, she reached a wide cross-section of Americans, engaging them in consideration of what democracy meant in their daily lives, around issues of gender, sexuality, racial integration, class, age, and immigration. Moore actively sought out publication in popular venues (like Vogue, The New Yorker, and the Saturday Evening Post, etc.) and wrote on material chosen to directly appeal to the audiences there, influencing younger contemporaries, including poets like Ashbery, O’Hara, and Bishop, and artists like Warhol, Yoko Ono, and Ray Johnson.

Elizabeth Gregory divides her life as a researcher between literary studies (particularly Moore studies) and explorations of the intersections of fertility and women’s work. She directs the Women’s, Gender & Sexuality Studies Program and the Institute for Research on Women, Gender & Sexuality at the University of Houston, where she is a Professor of English. Her books apart from this one include Ready: Why Women Are Embracing the New Later Motherhood (2007/2012), Quotation and Modern American Poetry: “’Imaginary Gardens with Real Toads’” (1996), and two edited collections—The Critical Response to Marianne Moore (2003) and, with Stacy Carson Hubbard, Twenty-First Century Marianne Moore: Essays from a Critical Renaissance (2017). She is a collaborator on the Marianne Moore Digital Archive and is currently completing work on studies entitled “Who Needs Kids?: Fertility, Workforce and the Future” and School/Work Synchrony: Building a Culture and Economy of Care. She and her husband have two excellent daughters.

“
‘Apparition of Splendor’ is brilliant and necessary. It provides an extended look at Marianne Moore’s late poetry that no other book-length study has taken on…. Gregory’s deep expertise is evident throughout. Her discussions make visible startling networks of connections between poems, and – while maintaining keen focus on the late poems – briskly but sensitively draw upon the earlier poems to clarify continuities and suggest transformations. Her archival and extra-literary research, in Moore’s papers and in regard to general cultural contexts, is wonderfully on display with every page.
The subject of Moore’s late poetry is woefully understudied, and this book will conduct an important intervention in critical tendencies to dismiss this body of work. ‘Apparition of Splendor’ is a major contribution to Moore studies and to studies of 20th-century American poetry.
”
- Linda Kinnahan, Duquesne University, author of Feminist Modernism, Poetics, and the New Economy: Mina Loy, Lola Ridge, and Marianne Moore
Library, Museums and Press
181 South College Avenue, Newark, DE 19717-5267