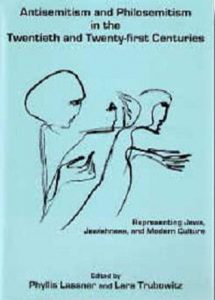 This book of essays provides a significant reappraisal of discussions of anti-Semitism and philosemitism. An outstanding group of contributors from political theory, film, English, gender studies, and history demonstrates that analysis of philosemitic attitudes is as crucial as are investigations of anti-Semitism. Topics include F. Scott Fitzgerald’s The Great Gatsby, Hannah Arendt’s politics, self-help guides such as Boy Vey! The Shiksa’s Guide to Dating Jewish Men, and contemporary cinema. This pathbreaking book shows the necessity of studying philosemitism as a critical manifestation of anti-Semitism and as a principle way that Jews have been and still are set apart from non-Jews. These essays will enable us to rethink historical debates surrounding the “Jewish question.”

About the Editors
Phyllis Lassner teaches Holocaust Studies, Gender Studies, and Writing at Northwestern University.
Lara Trubowitz is Assistant Professor of English at the University of Iowa.