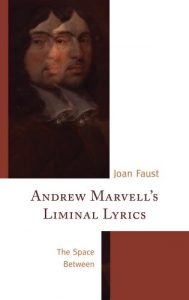 Andrew Marvell’s Liminal Lyrics: The Space Between is an interdisciplinary study of the major lyric poems of 17th-century British metaphysical poet Andrew Marvell. The poet and his work have generally proven enigmatic to scholars because both refuse to fit into normal categories and expectations. This study invites Marvell readers to view the poet and some of his representative lyrics in the context of the anthropological concept of liminality as developed by Victor Turner and enriched by Arnold Van Gennep, Jacques Lacan, and other observers of the in-between aspects of experience. The approach differs from previous attempts to “explain” Marvell in that it allows multidisciplinary and multi-media contexts in a broad matrix of the areas of experience and representation that defy boundaries, that blur the line at which entrance becomes exit. This study acknowledges that the poems discussed, and, by implication, the entire corpus of Marvell’s work and the life that produced it, derive from a refusal to draw a definite divide. In analyzing a small selection of Marvell’s life and lyrics as explorations of various realms of liminality in word and image, readers can see a passageway to the poet’s works that never really reaches a destination; instead, the unlimited possibilities of the journey remain. Thus, the in-between aspects of the poet and his poetry actually define his technique as well as his brilliance.