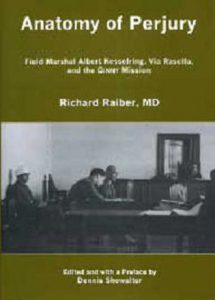 Careful review of microfilmed German operational records led the author to solve a World War II mystery involving Field Marshall Albert Kesselring and the Italian campaign he directed. Facts about two events in March 1944—the Ardeatine Cave Massacre and the failed GINNY II mission—were manipulated, and Kesselring’s 1947 defense was accepted without challenge until 1997, when Dr. Raiber found irrefutable evidence that Kesselring had misled the court in order to hide his involvement in the murder of fifteen U.S. soldiers who had been captured in uniform behind enemy lines. Kesselring claimed he was present in his Monte Soratee headquarters north of Rome on 23 March 1944 when he received and passed on Hitler’s 10-for-1 retaliatory order against the Via Rasella partisan, resulting in the massacre at the Ardeatine Cave. A day earlier, on the Ligurian coast, members of an OSS operational group, GINNY II, landed north of La Spezia. Captured behind German lines, these U.S. soldiers were interrogated, and summarily shot on 26 March. Thereafter Kesselring ordered the destruction of all records bearing on GINNY II to conceal his presence in La Spezia and his confirmation of the execution order but surviving documents clearly place him there at noon on 24 March.

About the Author
Richard Raiber died in 2002. The University of Delaware awarded his PhD posthumously in January 2003.