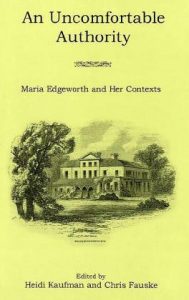 In recent years, Maria Edgeworth (1768-1849) has been the subject of increasing interest. A woman, a member of the landholding elite, an educator, and a daughter who lived under the historical shadow of her father, Edgeworth’s life is difficult to categorize. Ironically, the very aspects of Edgeworth’s identity that once excluded her from literary and historical discussions now form the basis of current interest in her life and her writing. This collection of essays builds on existing scholarship to develop new perspectives about Edgeworth’s place in English and Irish history, literary history, and women’s history. These essays explore the ways in which Edgeworth’s entire adult life was an attempt to reconcile the irreconcilable, an attempt to justify and preserve her own privileged position even as she acknowledged the tenuousness of that position and as she sought to claim other privileges denied her.

About the Editors
Christopher Fauske is the Assistant Dean in the School of Arts & Science at Salem State College, Salem, Massachusetts.
Heidi Kaufman is Assistant Professor of English at the University of Delaware.