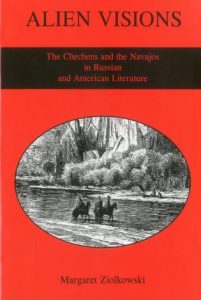 There are many parallels and some revealing differences in the encounter between, on the one hand, the Americans and various Indian tribes and, on the other, the Russians and some of the peoples of the Caucasus and Siberia. The enduring cultural consequences of these encounters provide a fruitful area of inquiry for the comparative examination of national images in literatures. The major focus on this study is the perceptions and literary portrayal of the Chechens by the Russians and the Navajos by the Americans. Both the Chechen in Russian literature and the Navajo in American literature are often constructs, images derived from a potent combination of prejudices and received assumptions. In each case a relatively sizable corpus of writings produced over a century or longer exemplifies or attempts to counter persistent and influential modes of cultural stereotyping. The diachronic analysis of the portrayal of either the Chechens or the Navajos illuminates patterns of prejudice that have immense implications for both popular and high culture. The juxtaposition of the discussion of the two groups as they have been treated in Russian and American literature can deepen our understanding of the commonalities present in attempted cultural domination or ethnic idealization.

About the Author
Margaret Ziolkowski is Professor of Russian at Miami University, Ohio.