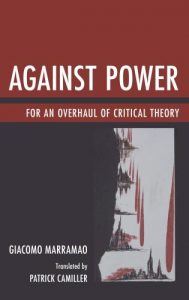 In his latest book in the study of power, Giacomo Marramao focuses on the work of two great Central European writers, Elias Canetti and Herta Müller, each of whom, in different periods and contexts, offered a philosophical genealogy of forms of domination and a radical diagnosis of power, command and law.

To grasp the meaning of the transformations of power, it is necessary to go to the roots: to the archē that originated it as a factor common to all human cultures and all historical periods. Power cannot be suppressed: any attempt to ‘overcome’ it (by eliminating one or another form of its exercise) has done no more than strengthen it. Power must, however, be ‘uprooted’ or subverted in its logic of identity, which is activated in the boundless character of desire and the paranoid scene of fear and the death of the Other. In the midst of today’s global world, to trace a line of opposition to power means to free ourselves from the alibi of objectivity and to focus instead on subjects and their potential for metamorphosis/regeneration. This is possible only if we detach ourselves from the ground noise of actuality and recover the broken thread of solitary and extreme works.